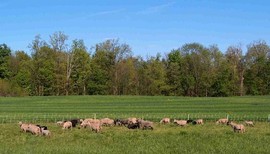 Olde English Babydoll Southdown Sheep originated on the South Down hills of Sussex County, England. By the early 1800s, Southdown Sheep had been imported into the United States where they were crossed on domestic sheep to produce a larger animal which are the domestic Southdowns of today. In 1990, some of the last remaining original Southdown sheep were discovered in England. Three hundred and fifty of these Miniature Baby Doll Southdown sheep were the basis for the Registry which was started in the U.S.

Adult Babydolls are 24 inches or less at the shoulder without wool. Babydolls are usually white; however, there are also black Babydolls in the Registry. They are easy to handle and are not aggressive sheep. Flocks can be maintained in a small pasture and do not require high fences. Ewes are good mothers and often have twins and occasionally triplets. Babydoll sheep have round "teddy bear" faces and appear to be smiling.